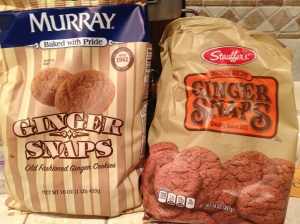 Mrs. Me loves the ginger snaps.  I’m not as big a fan, but sometimes they’re okay, and I’m always up for a taste test.  She likes the kind that come in the old-timey wax paper bags — I don’t know if they’re better, or more authentic, but that’s the house style, so that’s what we tested.

Specifically, Murray’s (“The Great Taste You Love Since 1941”) and Stauffer’s (“Quality Since 1871”).  Presumably they haven’t actually been in the bag that long.  These brands are typically available at your major U.S. supermarkets.

Overall, it was a split decision: Mrs. Me preferred Murray and I preferred Stauffer’s, although really both are fine.  Stauffer’s are slightly darker brownish-red, a bit larger, have deeper ridges, marginally chewier (though both are very crunchy), and have a mildly spicy afterburn, which I found interesting and Mrs. Me didn’t care for as much.  The Murray cookies may be more the Platonic ginger snap ideal, and if that’s what you’re after, I can see why you would choose Murray over Stauffer’s.

A few other notes:

Murray’s on the left, Stauffer’s on the right

The lead ingredients are all the same — enriched flour, sugar, and palm oil (though Murray throws soybean oil and “TBHQ for freshness” into the mix). But Stauffer has several unique ingredients: cinnamon, cloves, chili powder, and red pepper.  Surely all in minuscule quantities, and yet maybe enough to create that afterburn, which Mrs. Me thought might have meant more molasses.  Stauffer’s may also have slightly more molasses, but I think those spices are the key flavor difference.

They could have called the product Sichuan Snaps?

When the early January weather turns frigid and windy, what better to eat for lunch than ice cream?  Mrs. Me and I were, shockingly, the only customers at the locally-owned Moorenko’s Ice Cream Cafe (8030 Georgia) today.  Technically we didn’t get ice cream, we both got “Megajolt” (coffee/chocolate) shakes, quite tasty although little chocolate pieces kept clogging our straws. We will go back and try other flavors, but maybe not until May.

Fried chicken, mac’n’cheese, collard greens, cornbread: all excellent as usual. But we had never tried the General Store’s lemon chess pie until last weekend, and holy cannoli pie, Batman, it’s amazing. Delicious flaky crust would be enough to surpass most pies (including homemade) but the incredible, intense, rich creamy lemon-ness of it all…words fail. Best pie ever? A contender, certainly.  Gillian Clark gets most of the press, deservedly so, but I think I may be in love with head baker Beth Christiansen.  It’s okay, Mrs. Me feels the same way.

We also had pumpkin and raspberry-peach pies from Mom’s Apple Pie Company (Leesburg and Occoquan locations)  — this was a pieful weekend — and they were good, especially the tangy raspberries, but General Store (6 Post Office Road, Forest Glen) is the clear winner.

I love introducing people to Nava Thai (11301 Fern). We rave about it, setting the bar really high, and yet it never disappoints. Last night’s repast featured the fiery som tam (papaya salad), tom kha gai (coconut soup with chicken, less spicy than usual but still flavorful), pad thai, eggplant, panang curry, and roasted half chicken. I was this close to licking the panang plate at the end. They happily wokked up a special batch of plain rice noodles for the younger, pickier eater in our group. There were virtually no leftovers, just a piece or two of eggplant. Nava is consistently the best Thai around. We sat in the left side of the restaurant this time, usually we’re in the right side — left side is a little darker, but also more elbow room. The place wasn’t packed as it sometimes is but was doing a solid business.

We were stuffed, but ice cream had been promised to the young’un, so we cruised down Georgia to Tropical Ice Cream (9324 Georgia, more or less across from the Woodside Deli), which we have passed many times but never visited. We arrived barely before their 8pm closing time (hours are longer from April to August). They’ve been making their own ice cream in that location since 1984, specializing in exotic tropical flavors. Last night, the Oreo Cookie ice cream was a clear winner. I’m not a huge ice cream fan, but Mrs. Me and pretty much everyone we know is, and it did look good, plus I like the locally owned, friendly, self-described “cultural/quaint” atmosphere, so I’m sure we will be back when winter is a distant memory. They also have a rule I like and had never seen before: the first two tastes are free, and if you need more before deciding, you can pay a dollar and get up to ten additional tastes.  Seems like a creative, fair deal to me.

Hollywood East versus the Cupcakes

As is frequently the case on Wednesdays, we soak up some delicious news from our pulpy, fragrant, freshly delivered Wheaton Gazette.

Hollywood East Cafe (the restaurant formerly known as Hollywood East on the Boulevard, formerly formerly as Hollywood East) is about to reopen in the Wheaton Mall (“about” = this month, allegedly), specifically inside the Macy’s garage. Doesn’t seem like an ideal restaurant location, but hope it works out for them, as HE has been on the Wheaton scene for years and generally has done a good job, especially if you can order from the Chinese-language specials boards (which I cannot). Will be interesting to see if they can compete, given the new off-beaten-path location and the new, high-quality competition from New Kam Fong and Wong Gee.

The Gazette article notes HE will be across from “the new children’s pizza shop, Noble Roman’s Pizza and Playland, which [mall market director Sidney] Woods described as a “mini Chuck E. Cheese’s”.”  First I’ve heard of that place — do they have skeeball? If so, Mrs. Me and I will be making a visit ASAP. It was not until this very moment that I realized how sorely Wheaton has lacked skeeball for lo these many years. If the pizza is decent, that would be a strong bonus, but my hopes are not high on that front.

Elsewhere in Gazetteland, the dining review focusus on MoCo purveyors of cupcakes, a trend whose backlash has already arrived and which I never really understood in the first place, but then, in general I’d much prefer an empanada or samosa to any kind of dessert. All the cupcakeries are in Bethesda except Silver Spring’s Cakelove. O-ver-ra-ted, as the sports fans chant. I fully acknowledge that I’m biased against, so maybe my cupcake-loving friend(s) (you know who you are) will comment…