Wheaton Safeway is a Safeway 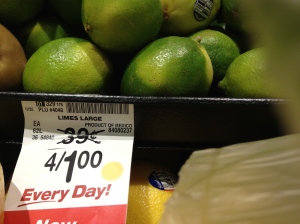 Wheaton Safeway has limes, so it must be okay

Now that our long local nightmare is over and the Wheaton Safeway is open, you may ask yourself, how is that new Safeway?  And you may say to yourself, my God, what have they done? Then again, maybe not.

Wheaton’s Safeway turns out to be perfectly Safeway in its Safewayness, with a few quirks.  First, I like the parking garage, spacious and well-signed and well-lit, but then again I have already heard complaints that it is too tight to navigate comfortably.  I had no trouble,* but it was mostly empty when I was parking. I don’t know if the garage will be big enough at busy times, and they need to work out some vertical kinks: the escalator, including the cart-mover, isn’t always working, and the elevators are spacious but the doors like to close before you’re fully past them, which seems dangerous but, who knows, maybe it’s part of Safeway’s master plan.

* Some fool did leave a cart right in the middle of one driving area, forcing me to take a longer route out — why do people have such trouble returning carts to appropriate places? Not an unusual occurance.  It’s things like that that make me hate people.

The store itself is laid out unusually, with the deli (and Starbucks) immediately to the left inside the front doors, the checkout lines ahead and to the right, dairy and frozen foods immediately ahead, and the rest of the store continuing back.  Now that I’m typing it, it doesn’t seem so different than usual, but when you’re there it feels a little odd.  But the decor and the products and everything are exactly what one expects.

In these initial weeks, they’re overstaffed, offering lots of samples and being super-helpful.  We will see how long that lasts.  On one of my visits, the number of Starbucks employees (six) nearly exceeded the number of shoppers (in the whole store, not just Starbucks).  That may be the biggest danger with this store: I hope Safeway is prepared to be not super-busy for a while, until all those apartments above the Safeway are lived in and other Wheatonians internalize the fact that Safeway is open for business again.

Oh, and there are limes at the new Safeway, 4 for $1 (“Every Day!” allegedly), good price but mediocre quality, mostly small and hard.  Of course it is not currently lime season, and most other sources struggle from November through March.  Hung Phat remains the current lime go-t0 of choice.

New Wheaton Safeway Opens, Gets the Led Out

Wheatonians of all ages were stunned Friday morning, not only by the renewed availability of citrus fruits, canned goods, and other sundries at the Georgia-Reedie intersection, but also (secondarily) by the unannounced reunion of the English rock band Led Zeppelin, who regrouped in a decreasingly quiet corner of the new Safeway for their first live show with John Bonham* since 1978 and their first concert in Wheaton since 1969.**

Zeppelin ripped through a short set of hits, starting with Celebration Day, ranging from Kashorkreditmir to Custard Pie to The Lime Song, and finishing with a blistering The Safeway Remains The Same (But Now With Starbucks Inside). MoCo Executive Ike Leggett joined the crowd of hundreds dancing throughout the shiny new store, uprooting shelf displays and causing cleanups on aisles 3, 7, and 9.

Few had previously known the true extent of Zeppelin’s connection with Wheaton.  Aside from the legendary 1969 show at the Wheaton Youth Center, singer Robert Plant also noted, over the opening riff to Escalator to Heaven, that the classic song was originally inspired by a post-WYC-show, adrenaline-and-drug-fueled premonition of Wheaton Metro’s longest-in-the-Western Hemisphere trio of moving staircases, which were completed in 1990.

“I’ve been wanting to return to Wheaton for decades,” said Plant, “and finally there was a suitable occasion, with the opening of this fine modern supermarket.”

The band also unveiled a new song, Feral Urbane Blues, hastily written Thursday night over vegetarian kaprow and several cases of Singha in a back room at Ruan Thai.

“I always fondly remember our ’69 show in Wheaton. whether it really happened or not,” said guitarist Jimmy Page as he purchased a cup of pre-show mulligatawny from the Safeway deli. “Who’s to say? I mean it’s no Machynlleth, but still quite wonderful.  This soup is bloody tasty, innit?”

Plant and company refused to answer questions about possible other gigs, and after their performance the band was quickly swept by management into a large van in the Fern Street loading docks and whisked off to an undisclosed location.  MoCo and Safeway officials also refused to comment.

Nice to have a grocery store there again.

* I can’t explain it, but there he was in the dairy section, banging away on the skins, looking somewhat moldy and less manic than before, but otherwise no worse for wear.

** Just like Woodstock, and just like today’s Safeway show, you only remember it if you weren’t there.

Substantial reporting on this story was done by Mrs. Me, for which I thank her profusely; however, any factual inaccuracies are mine alone — though I don’t think you’ll find any.

It is Safeway Week here at GEIW, how am I supposed to resist posting about the onslaught of swag appearing on my doorstep?  I am a sucker for swag. Coupon books upon coupon books, and today a FABULOUS NEW reusable grocery bag, branded with the Wheaton Safeway at The Exchange logo.

But wait, there’s more: another coupon for ANOTHER FABULOUS NEW reusable grocery bag!  That’s two bags — NOW how much Wheaton Safeway at The Exchange shopping will I do?  Dunno about “will” but I am certainly well equipped in the event.  Well played, Safeway, well played.  Although the free bag coupon asks me “Have you checked out our new Safeway yet? There’s so much to explore and discover…” No, I have not, because it is not open yet.  Or should I be reading between the lines, breaking into the building and doing a little pre-shopping shopping?  I don’t think so.  So they’re ahead of themselves.   Must…wait…Friday… 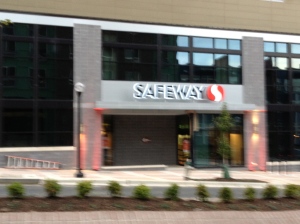 All ready with the mood lighting

I now have two copies of the fat Grand Opening coupon book.  One for Mrs. Me and one for me equals double the savings!  The coupons are pretty good actually, a bunch of free items with $20 purchase, which will be no problem.  I just hope they don’t immediately sell out of the potentially free items in the first few hours.  Rain checks are a pain.

Anyway.  Looking forward to the Friday grand opening, in spirit if not in person.

Hear me now, believe me later — I’m still not sure I believe it yet, myself.  Wheaton is about to have a Safeway again, no more “coming soon” teasing.  The store is set to open on Friday (October 25) morning at 8am for a “special preview” “sneak peek” to which I assume every sentient being in a three mile radius has been invited.  There will be tastings!  Of what, specifically, I’m not sure.  Will there be MoCo or Wheaton dignitaries on hand to cut ribbons, stock yogurt, bag my groceries?  I don’t know, and I may never find out because of having to be at work on Friday morning instead of at Safeway.  I will check the new digs out next week, just on the off-chance there is any feature distinguishing it from all other new Safeways.  It is, after all, just another Safeway.  I don’t want to oversell it.   But it will have been three years, ten months, and six days since a grocery store was open for business at the corner of Georgia and Reedie, and (as one might expect from my obsessing over it throughout that period) I am looking forward to that desolate streak ending.

If it is in the coupon flyer, it must be true

I think they’re serious this time. 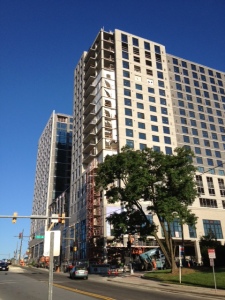 Once construction finally began, the new Safeway/apartment building across from the Wheaton Metro developed quickly, and the Safeway might be open by “the end of summer” — maybe by Labor Day, maybe by September 21, or maybe not even that soon, but it does look like they’re getting close.   The December 2009 closure of the original Safeway seems so long ago (probably because it was).  I am looking forward to being able to pick up milk or sundries, on foot, on my way home from the Metro after work.  Not to mention being able to visit Starbucks without having to deal with mall traffic.

Until recently Safeway was hiring for many positions in the Wheaton location, from manager to checkout clerk to night stocker (presumably not to be confused with night stalker, which Wheaton does not need any of, thanks anyway).  But the positions evidently have all been filled.  Hope some locals got some of the jobs.

Lots of reWheatoning going on, between the Safeway and the sudden/rapid reno of the office building tucked amongst Archstone on Georgia near the Metro, and the new apartment building going up just a bit further south on Georgia.

So much for Zombie Safeway.  Kids these days are much too young to remember the golden age when Wheaton’s Safeway was open for business:

The Way We Were

…but then it closed… 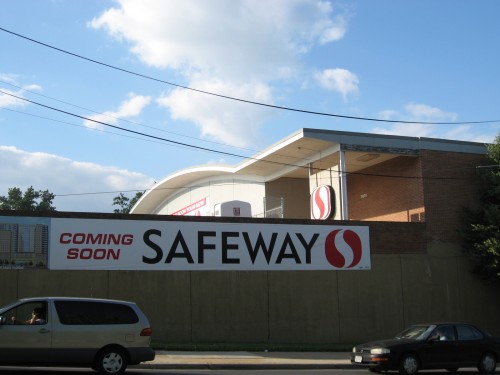 Don't Come Around Here No More 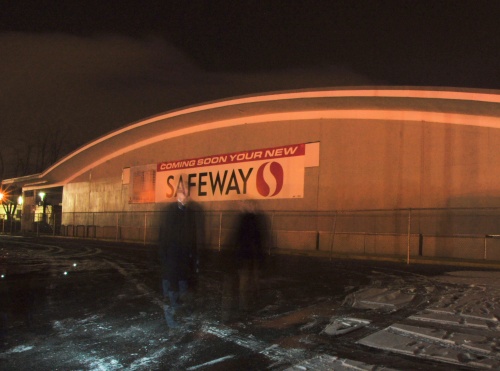 …but finally has found peace.  Or at least is in pieces, which is all I ever really asked for…

Ashes to Ashes, Dirt to Dirt

…and someday we will have this:

Artist's Rendering: Do Not Try This At Home

Flintstones? Hamburglar? Or the sweet loud sound of a crumbling zombie grocery store?  Down goes Safeway!  It took nearly two years to get started, and the entire edifice has been pretty much destroyed in less than a week.