Would Bury Kitchen? No, Not Exactly

I’ve been struggling to come up with anything clever* to say about Woodberry Kitchen, one of Baltimore’s newer hot restaurants.  “Newer” in my addled mind, at least – it opened in 2007 and so is hardly new anymore.  We finally went recently (but getting less recent by the day) and our high expectations turned out to be too high, but in ways I’m finding tough to express.

* As this review will surely demonstrate.

There is lots to admire about WK: in particular, the space, which is divided into several large, high-ceilinged rooms with lots of wood and brick. The restaurant is part of the revitalization of the old Clipper Mill site, ravaged by fire in 1995. The redevelopment has maintained the industrial feel, including the facade of the old foundry, and WK fits in beautifully, a sort of rustic elegance.  The upstairs section above the bar looks cool. They also have a nicely appointed outdoor courtyard where, surprisingly, the acoustics are better than the fairly loud indoors, thanks to a wall of trees and shrubs blocking street noise.

Service is also excellent if a little slow at times – they seemed to be a person short, maybe.  But everyone is friendly, knowledgable, helpful, and (sometimes too) unobtrusive. 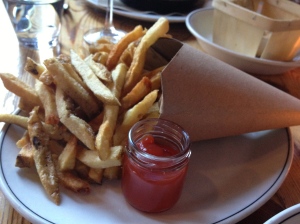 And the food was fine – good even, and we appreciated many small touches – but not great.  We had been expecting great, and maybe that was unfair, since really Woodberry Kitchen is a neighborhood bistro, it’s not trying to be Charleston or any kind of expense account restaurant.

For example, blackened rockfish was served on a bed of fresh greens in a zesty pool of soy-based broth, and the exterior was nice and dark, but the fish itself lacked much flavor. Rigatoni was fine but not any different than you get at many neighborhood Italian joints. Thin crisp french fries served in a  cute paper cone had good potato flavor and would have been great if they had been served above room temperature (we did also like the mini-mason jar of ketchup on the side).

Sometimes the starters outshine the entrees, but for us it was more of the same. Popcorn could be a fun snack for starters, but as with the fish, it needed more seasoning. The “crab pot” – cheesy sherried crab dip — was, again, fine but not extraordinary, particularly once it started to congeal not long after arriving at the table.  Are we sensing a theme?

Woodberry Kitchen isn’t crazy expensive, but it isn’t cheap either, with most entrees in the $25-30 range.  At those prices, in those surroundings, and given the local-celebrity chef Spike Gjerde hype, the food really should be more exciting.  We do appreciate the local sourcing, farm-to-table thing, but that isn’t enough to overcome…not exactly lack of execution, just lack of excellence.  Good, just not great. In the end we were glad we went, but I don’t think we would rush back.